The Castles or Human Towers is a spectacular Catalan tradition, recognized by UNESCO as intangible cultural heritage from 2010.  The towers are build with «castellers», those who built with their bodies.

Apparently the origin is from smaller uprisings that were erected during the so-called dance of Valencians , a dance that was held south of the Ebro delta in the fifteenth century.

Three hundred years later they extended to the Camp de Tarragona, in southern Catalonia, where overcharged own entity, detached from dances and focused on achieving ever higher and original towers. Then they were renamed castles and become part of local festivities.

The first documented performance of castellers dates from February 2, 1801, during the Decennial Celebrations of the Virgen de la Candela in Valls (Tarragona). The groups called colles castellers and castles are divided into several parts: the pinya or base, formed by several concentric strands of persons; the tronc, visible trunk of the tower, multistory; pom de dalt or upper floor; and enxaneta, the child who climbs to the top and lift the arm without the castle crumbles.

Normally nobody gets injured, they are very prepared and trained. The little boys that climb to the top always are wearing a helmet.  The tallest castle could be until 10 floors of three people each floor and also can have differente shapes as a pyramids, revolving towers, etc. Some of the structures can be pretty intricate. The music, as in the castells, is always present, although they do not go as high up as the human towers. 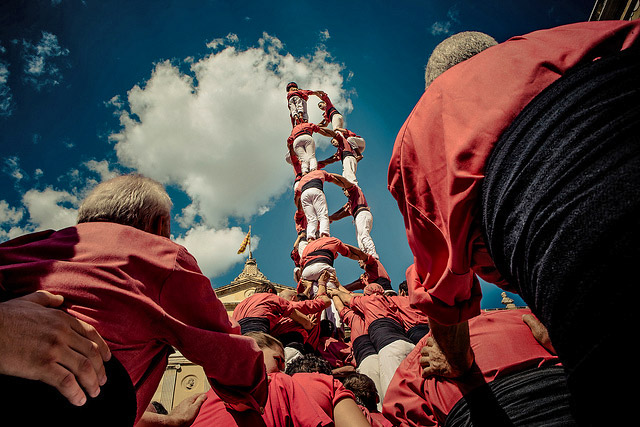 Here in Barcelona almost once per week, castellers performance in different places of the city. Do not hesitate to assist to such amazing performance.

In this link you can check the agenda of the castellers of Barcelona: http://www.castellersdebarcelona.cat/ .  If you are staying in our hostel in Barcelona our staff will help you with indications.

Barcelona is an alive city, full of traditions and historic remains. A city that needs to be lived! Also in our hostel in Barcelona, Amistat Beach Hostel, you will find some extra information about the city in our different maps, but I would recommend to join our free walking tour to discover the best spots of Barcelona.